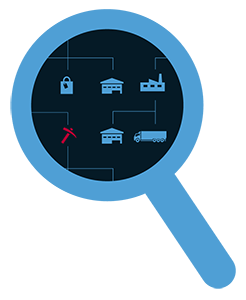 The Modern Slavery Act 2015 has now been in effect for well over a year and businesses across the UK have had to adjust to ensure they comply with the Act. While this means large corporations such as ASOS have had to re-think the way they monitor and audit their suppliers. Some companies have yet to produce a slavery and human trafficking statement, a requirement under the Act for businesses with an annual turnover of over £36 million. Knowing what to look for in supply chains will help your procurement team identify potential red flags within your supply chain.

Make your staff aware of your slavery and human trafficking statement

Ask your supplier the right questions

Since its introduction in 2015, large businesses have been found guilty of having children working in their supply chains, despite claiming to have monitored those sites and found the factories to be slavery-free. How were these factories allowed to operate for long without being caught? Knowing what to look out for will help procurement chiefs identify a red flag when they see one.

Here are some key questions to ask your supplier:

To view specific points for procurement staff to look out for while carrying audits, download a free supplier audit checklist.

Look out for red flags in the supply chain

It is important to be able to spot the signs of modern slavery in the supply chains. Here are six signs to look out for:

Are workers’ documents, such as passports, being held by someone else for ‘safekeeping’? Are they forced to live on the factory premises? Factory managers often withhold workers’ passports to limit their power if they complain against their tough conditions

If you see someone who looks frightened, scavenges for food or does not answer when spoken to directly, they may well be a victim of Modern Slavery. There was recently a case where a flight attended was able to help rescue a young girl from trafficking by spotting red flags in how she behaved:

“Something in the back of my mind said something was not right. He was well-dressed. That’s what got me because I thought why is he well-dressed and she is looking all dishevelled and out of sorts?”

The flight attendant then passed the girl a note during the flight, and she responded with the message: “I need help.”

Have staff been properly trained? Are they forced to work excessively long hours? These are red flags and must be followed up.

Here, red flags include not knowing or not having a home address, living in poor conditions and not having their own set of house keys.

Those exploiting individuals as slaves will often use their financial situation to retain control over them. For example, workers will often be bonded by debt and forced to work in substandard conditions to pay the debt. They can also be forced to work off a debt for travel, food, accommodation or training. This leaves them with very little or no money to take home, binding them to many more years as a slave.

Do the workers show signs of physical injuries that they could have got from being beaten? Do they look disheveled and unkept, or simply malnourished? Are they showing signs of drug addiction such as track marks, sunken eyes and few teeth? These are just some of the signs to look out for. If, when carrying out an audit, you notice these signs, you should ask further questions.

Typically, a Modern Slavery Statement should include information on training your staff is undertaking. Staff should be made aware of red flags to lookout for, questions to ask suppliers and how to diminish the chances of modern slavery in the supply chain. VinciWorks has two courses on Modern Slavery that are completely up to date with the UK Modern Slavery Act 2015. The first course, Modern Slavery: Preventing Exploitation, provides key examples of red flags to look out for, explains internal reporting procedures and provides modern day scenarios. We have also recently released a new course, Modern Slavery: Practical Steps for Procurement. This new, advanced course gives further red flags and labour abuse indicators and is tailored to those who have already completed the first course.

Staff must always feel comfortable reporting fears of modern slavery in their supply chain. Organisations should therefore have a protocol in place for staff to follow should they have any concerns. The policy should be available to all staff and should contain the following:

Feel free to download our modern slavery whistle blowing policy template that can easily be edited to suit your company and industry.